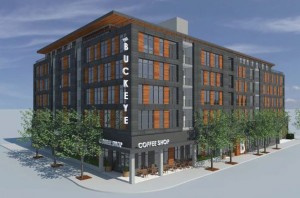 The Third Ave Development dubbed “The Buckeye”  will be on tonight’s City Council meeting agenda if anyone is interested in learning more about the project.   The project has went through initial and final approval from the City Planning Zoning Commission, and a first round of City Council approval , and is going back to City Council tonight following the second CPZ approval.
The developer Stencil Group has worked closely with the neighborhood leadership to incorporate neighborhood input.  We look forward to redevelopment of a key piece of property the main entrance into our neighborhood from downtown at the corner of Third Ave & Fourth Streets SE.
At the last City Council meeting the developer and project was praised for it’s attractive design and developers willingness to connect with the neighborhood early in the process.
The name of the development has been brought up at a couple neighborhoods, with mixed opinions, and the SPNA board has agreed to leave the naming of the property up to the private developer who is investing in our downtown and entrance into our neighborhood.
Meeting Agenda: http://rochestercitymn.iqm2.com/Citizens/FileOpen.aspx?Type=1&ID=2156&Inline=True
City Hall
City Council Meeting:
Open to the Public
7:00 -10:00 pm

A proposed landmark redevelopment project at the corner of Third Ave & Fourth Street SE received unanimous City Council approval for Incentive Development this past week.  The redevelopment project dubbed The Buckeye is a $17 million dollar, six story mixed-use apartment building (80% market rate/20% affordable) with retail on the main level, and structured parking integrated into the building footprint, and street-scaping to include trees and benches.  Slatterly Park leadership has worked closely with the developer since the spring of 2015 to incorporate design principles, and encourage public/private partnerships with adjacent property owners.  The Slatterly Park board wrote a letter of support to City Council pointing out the great communication with the developer (The Stencil Group) and the willingness to work with the neighborhood.  The letter also encouraged the developer to incorporate a public art piece at the corner of 3rd & 4th as an ode to Slatterly Park’s effort to become the artist quarter of downtown, and our efforts with Art on the Ave